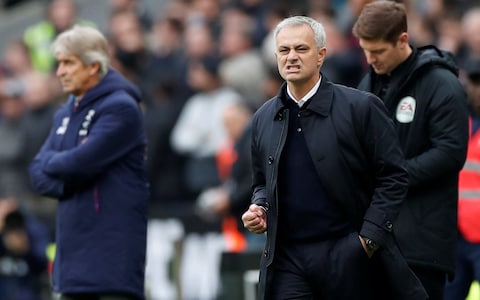 Matchday 13 in the Premier League was filled with lots of drama for the big-six clubs and as always, we’re on hand to provide a comprehensive report of the games for you.

Earlier in the week, Mauricio Pochettino, who was on our list of coaches most likely to be sacked by season’s end, was relieved of his duties!

Daniel Levy then appointed the self-proclaimed “humble one”, José Mourinho as Spurs manager barely 12 hours afterwards. Already, he is making an impact at his new club.

In the other games, Liverpool showed their fighting spirit against Palace, Chelsea outplayed the champions and Arsenal struggled to draw against 19th place Southampton.

A couple of players in the Scout’s picks for gameweek 13 have come good. Others, not so much! 😷

Without further ado, here is a breakdown of how it all went down:

Thank you, Mauricio, but Mourinho is here now.

The Portuguese masterminded Tottenham’s first away victory in the Premier League in almost a year.

Goals from Heung-min Son, Lucas Moura, and Harry Kane were enough to see off a late fightback from West Ham at the London Stadium.

The game started rather dull with West Ham sitting tight and compact in their defensive third. Spurs had the lion’s share of possession, but they couldn’t make anything of it.

It all came to life in the final 10 minutes of the first half, though. Son scored a well-taken goal and then turned provider moments later for Lucas Moura to poke home from close range.

Kane headed in from 6 yards at the restart to make it 3-nil, but it all went downhill for Mourinho and Spurs from then on out.

The introduction of Michail Antonio gave West Ham a much-needed lift.  They pulled two goals back inside the last 25 minutes of the game – a period in which they totally outplayed Spurs.

They could have drawn the game had VAR not intervened and rightly disallowed a Declan Rice goal.

It’s one win in one for José Mourinho but for his opposite number, Manuel Pellegrini, the pressure mounts. West Ham are without a win in their last 8 games in all comps – having lost six times in that run.

There’s still a lot to work to do for José Mourinho, but he’ll be happy with the result in his first game in charge as Spurs boss.

You just can’t roll over this Liverpool team. They always manage to find solutions to win the game whatever the situation might be. The mark of champions!

When Roy Hodgson said in his pre-match press conference that Palace weren’t going to be doing Liverpool any favours on their way to probably lifting the Premier League title, he was absolutely spot-on.

Man-to-man, tackle-for-tackle, and desire to win, Palace matched Liverpool on every front on Saturday.

In fact, the first half ended goalless. But it won’t have been so had VAR not intervened to chalk off James Tomkin’s headed goal.

After the restart, Liverpool came out flying, and it wasn’t long before Sadio Mané diverted the ball goalwards from an Andy Robertson cross.

Palace were not done though. They battled and clawed their way back into the contest. On the 82-min mark, talisman Zaha let the ball roll across his body at the top of the six-yard box before crashing his shot into the opposite bottom corner.

At that point of the game, a draw would have been a fair result for both sides. But Liverpool had other ideas.

Palace were only level for three minutes. The ball fell to Roberto Firmino in the area following multiple ricochets off a corner and he made no mistake.

Firmino’s goal helped Liverpool maintain their 8-point lead at the top of the table and extend their 30-game unbeaten run in the League.

Same old Arsenal are now without a victory in their last 6 Premier League games. In all fairness, they deserved to lose this one.

Alexandre Lacazette’s stoppage-time goal might just have saved his manager’s job, at least for a while, but we’ll see about that.

Southampton outmuscled, outplayed, and outshot a lacklustre Arsenal on their patch. Were it not for some ludicrous finishing from the Soton attackers; they should easily have won the game by four or five goals.

They started the game on the front foot and already had taken 6 shots in the first 15 minutes.

One of them was the opening goal by Danny Ings, scored off a set-play in which the Arsenal defenders were caught napping.

Lacazette equalised 10 minutes later following some excellent work by Kieran Tierney on the left flank. The game opened up afterwards and both sides had potshots at goal.

The second half began similarly to how the first ended until Tierney was adjudged to have fouled Ings in the 18-yard box.

Ward-Prowse missed the resulting penalty but scored off the rebound to put the Saints in front for the second time in the game.

Arsenal committed men forward to get an equaliser. In the process, they were left exposed at the back multiple times. However, the Southampton strikers could not take full advantage to kill off the game.

They got punished for it, though, as Lacazette’s second goal of the night clawed back a point for Arsenal.

The draw sees Arsenal slip down to 7th on the log, as the pressure on Unai Emery continues to mount. It remains to be seen whether or not the Arsenal board will axe him during this run of bad form.

This can’t go on. #EmeryOut

We all know what the Arsenal fans want though 😂.

The biggest game in our Premier League matchday 13 report did not disappoint! Frank Lampard led his former club to the home of his other former club, and the home fans gave him a positive reception all round.

Credit to Super Frank, Chelsea went to the home of the champions and did not shelve the attacking style of play that has brought them so much success this season.

In fact, they beat Man City and Guardiola in all pass and possession-related stats – a feat that rarely ever happens to the Citizens.

However, all that yarns na okoto meow kututu meow to be very honest. They were found wanting in the only statistic that matters – golazos.

The first exchanges were very lively with De Bruyne and Willian trading shots at both ends. However, Chelsea had the better chances with Abraham and Tomori going close at some point.

Chelsea’s very positive start to the game was rewarded after 20 minutes. Ngolo Kanté latched on to Kovacic’s lofted through-ball and scored past Ederson through the legs of Benjamin Mendy.

De Bruyne responded in kind eight minutes later. His left-footed shot deflected through the legs of about three Chelsea players before hitting the back of the net.

Like a flash, City were 2-1 up following a mazy run and a cute finish into the bottom right corner of Kepa’s post by Riyad Mahrez.

Kepa almost gifted Aguero a goal just before halftime. He mistakenly passed the ball to the striker, but the Argentine’s effort crashed against the crossbar.

The second period saw Chelsea pushing for a goal and City hitting them on the break in return. An exhilarating, back-and-forth affair that any neutral would have enjoyed thoroughly.

Raheem Sterling scored off one of such breaks late in the game. But VAR reared its ugly head for the umpteenth time to rightly rule the goal out for offside.

The win saw City rise to 3rd on the log and close down Liverpool’s temporary 12-point gap over them back to 8.

Lampard has lost all of his big games this season as Chelsea boss. And like the other times, he praised the effort of his players after the game. He always does this when his team play well but lose.