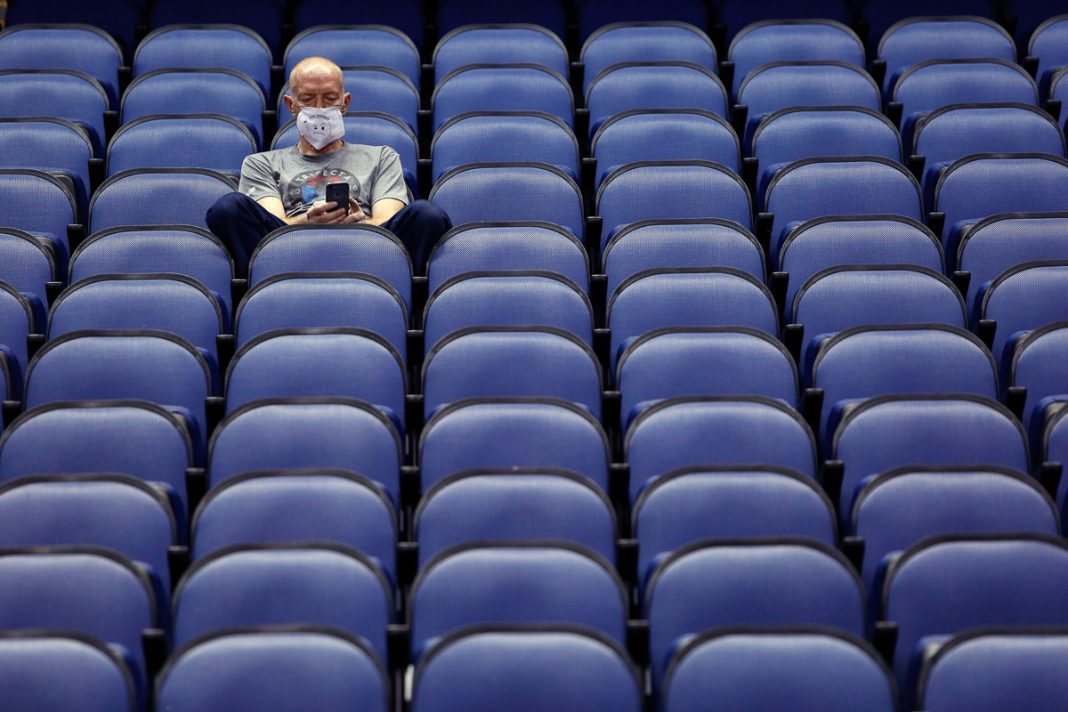 Would you believe that it took the Premier League exactly 100 DAYS to return from its lay-off?

Yeah, you read that correctly, a hundred days!

Last time we saw the League, a certain Harvey Barnes from the Midlands was celebrating the last goal in what was a freak of a show against Aston Villa on the 9th of March, 2020.

You can witness the Harvey Barnes magic on that day here:

100 days later, “Project Restart” has decided to tickle our fancy with a mouthwatering clash between the Cityzens of Manchester and the London babies from Hale End on the 17th of June, 2020.

Yes, our tongues are watery for that, and we cannot wait!

But let’s not forget that the Premier League spent 100 days on the canvas, K.Oed repeatedly by Coronavirus, and couldn’t even throw a punch in its own defense.

If a certain Olivier Giroud had gone that long without hitting the back of the net, I doubt if he’d still be donning the blue jersey of those Russian Billionaire-backed Pensioners from London.

Guess we all need to get up from our seats and pay the 19-year old from the little town of COVID some homage for sending the game to the stands for that long.

And not just a random homage, but a replica of what Madeira-born Ronaldo received at the now Allianz Stadium in Turin a couple of years ago.

While the rest of you are jamming your hands and paying homages, let me quickly brush through a list of things we’ve missed the most about our darling Premier League.

We are sure you missed them too!

PS: With the return of the Prem comes the return of FPL. We have curated a JUICY list of fantasy tips to help your FPL team hit the ground running. Check them out here.

Back to the matter at hand!

1. The Sound of The Voice of Peter Drury

Definitely not gay love, but can somebody please tell Mr. Drury that we are so in love with him?!

His choice of words, his use of metaphoric punchlines, and his verbal dexterity are definitely up there with the things I love the most about the Premier League.

When you hear the man commentate, you’ve got to wonder whether he’s been taking some pages from Kendrick Lamar’s playbooks.

Such is the exquisiteness of his commentaries!

So when COVID decided to send the game crashing down the canvas, we certainly missed the man and his poetic pieces 😭 (oh my tears, why roll down now?).

Remember how he came up with the analogy of Judas Iscariot’s “Silva” and Gabriel “Jesus” in the last Manchester derby, around the time when Christians all over the world were preparing to commemorate the death and resurrection of their saviour?

Emphasizing the substitution of David Silva for Gabriel Jesus, he said, “Silver for Jesus, a move Judas would be proud of.”

If only we knew football was going on holiday after that, perhaps we would have savoured that commentary more.

I’ve always told my friends that anything the Premier League does, it does in style.

So when VAR came and was plunging everyone’s heart with its dagger of errors, I told my friends again, “Premier League makes its mistakes in style.”

If not, how would the English media sell?

So please, to the ever-dramatic on-field Premier League referees and the guys at Stockley Park, we really want to see more of your drama when the game resumes again.

But please get your errors off North London, those guys there are just a bunch of kids trying to earn a seat at next season’s UCL table.

They haven’t done that since their papa ended his 22-year reign. Plis, help the less privileged 😂.

That man is just the opposite of everything that is wrong with our world.

We lie; he tells his fact no matter who gets offended.

We strive to be decent; he’s thrown his decency outta the window.

He speaks his piece, provokes you into retaliatory remarks, and before you know it, you’ve lost your cool, and you’re already rumbling his shirt on the touchline.

Oh no, you can’t. The old man is probably at FIFA’s headquarters as we speak, leagues away from the Premier League!

Jose Mourinho’s antics and tantrums are certainly one of the things I’ve missed the most about the Premier League.

And I’m sure it’s the same for you.

Speaking of Jose Mourinho’s antics, you won’t believe that man still found a way to ruffle the feathers of the powers that be in England, even when the game was on vacation.

Mans legit held a training session against the government’s lockdown rules! Such disregard for authority; I love it!

If the game hadn’t gone on an enforced break, maybe we would have seen some Zee World-esque drama from the Portuguese tactician.

Anyways, now that we’re back, we look forward to seeing many more of his tantrums.

Who else enjoyed how Liverpool’s glorious run was coming to a comical end?

Be honest here, this is a safe space for open communication. I mean, you’ll never walk alone 🌚.

First, it was Issa Sarr, then Ross Barkley, and later Alvaro Morata.

Tbh, those last weeks that preceded the break were hell on earth for the Red Beast.

And man, I really enjoyed it!

Of course, I’m no loser, but as a rival fan, I certainly enjoy it when the light goes out of a rival club’s dreams.

I enjoyed watching every moment of their UCL crash out, their demolition at the hands of Chelsea in the FA Cup, and of course, Watford extinguishing their quest to become the new invincibles.

Can’t wait to see what awaits the Reds now that the League is back. Perhaps they will bottle the league again.

Before y’all come for me, I wouldn’t bet against them doing that LOL.

This a crucial one on the list of things we missed about the Premier League.

Oh dear punters, how did ye survive those weeks without Premier League football?

In just a single week, that sh*t legit devoured my bankroll.

But with no Liverpool win, Kevin De Bruyne assist, or a Jamie Vardy goal to stake on, the entire world felt like a place of utter uncertainty.

If you’re still wondering, of course, those three events were the likeliest things to happen every single weekend.

At least you know that provided Liverpool doesn’t face an Issa Sarr, they shouldn’t have a problem winning. That’s a basic betting tip for you!

And, of course, you can always trust KDB to rip teams apart with his assists.

In the rarest of scenarios that both events decide to pull a cat outta their bags, you can always back your Vardy to make the net smile.

Long story short, with the Premier League back, you’re never going to run out of possibilities to bet on.

Unfortunately, COVID-19 effectively saw to it that punters worldwide had nothing to bet on!

We back now. *Cries happy tears of two odds.

Such frenzy, Such savagery, Such mockery – trust me. It can never be matched anywhere.

From the gallery of memes to tons of hilarious photos, rib-cracking videos to savage tweets,

Provided you’re not on the receiving end of the bants, though!

Just ask any Man United or Arsenal fan around you. Those folks have been the most battered and bruised lots on Twitter.

I can’t wait for the premier league to resume.. I don’t like the way arsenal fans are adding weight 🤣🤣

But that didn’t even intrigue me as much as the cracking video I saw a while ago.

The video shows an array of bottles painted in the famous red and white colours of Arsenal and the red and black colours of Manchester United, and with the UEFA Champions League theme song blazing in the background.

Two clubs that are likely going to ply their trade in the Europa League next season.

The joke was meant to troll the fans of both clubs and to remind them that even though we were all missing the Premier League at that moment, they wouldn’t have things so rosy when the league resumed.

From Italian Mulumbu (Jorginho) to Playmaking, defensive 9 (Firmino), and Belgian Kim Kardashian (Hazard) there are no limits to these bants.

To say that we’ve missed our darling league would be an understatement.

Bants, opinions, latest news, and quality content — we’ve got you!

What did you miss the most about the Premier League? Let us know in the comments section below!