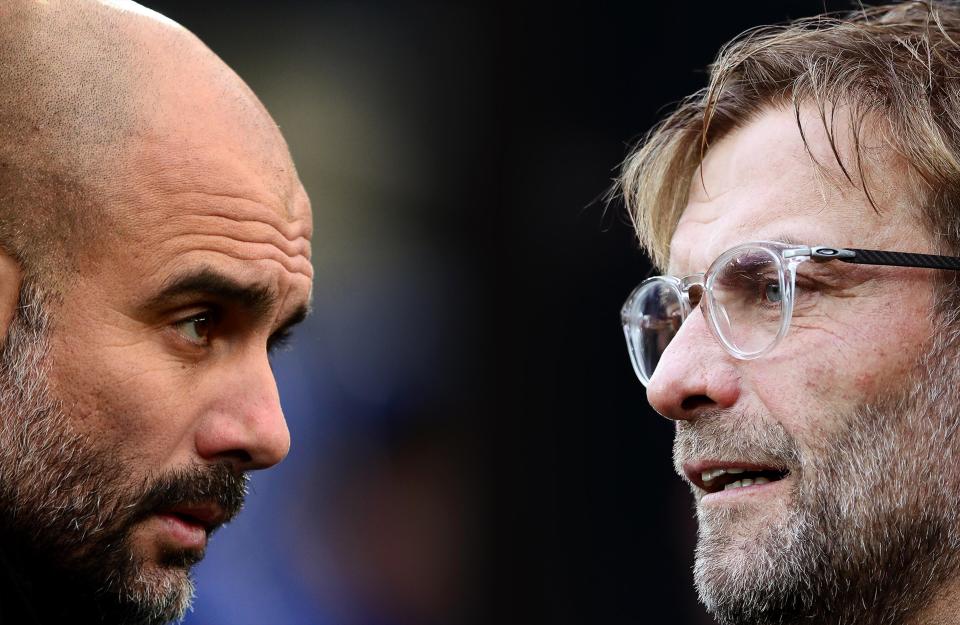 When Jurgen Klopp and Pep Guardiola had their very first meeting in 2013, neither could have predicted their rivalry would span two countries. This Klopp versus Guardiola is dubbed “The new Ferguson vs Wenger with less aggro” by The Sun, and we can’t disagree.

These are two managers who couldn’t be more different. Klopp is a charismatic, often animated manager on the touchline and during press conferences. On the other hand, Pep is the very definition of cool, calm and collected.

Pep has called their relationship a “beautiful rivalry.” This is very different from the rivalry between Alex Ferguson and Arsene Wenger, which was anything but beautiful.

As the football world is obsessed with comparison, for sure, these two great managers of their generation have been pitted against each other. Here, we take a look at various arguments to figure out who the better coach is.

In terms of tactical philosophy, the Klopp vs Guardiola debate has two distinctly opposite philosophies.

Pep is a disciple of Johann Cryuff, and he has adopted his style as a coach popularly known as “Tiki-Taka”. It is a disciplined playing style which focuses on possession and aggressive pressing off the ball.

His philosophy has seen him adopt a variety of formations over the years, including the 3-4-3. However, his preferred formation has always been 4-3-3. This style requires midfielders that are very comfortable on the ball.

Since his arrival in the Premier League, he has had to tweak his style due to the madness of the league. His abilities as a manager have led him to unprecedented success in all three clubs he has managed including a staggering 14 trophies at Barcelona in 4 years.

Pep is a master tinkerer, and he is a nightmare for FPL players.

Klopp, on the other hand, favours counterattacking and high pressing football popularly known as “Gengenpressing.” Several teams have tried to adopt this style, but the most successful implementation have come from Klopp’s sides.

The gengenpress is a demanding style that requires pacey players who can press the ball from the opposition half. This led him to success with Borussia Dortmund dominating Bayern Munich for two years in Germany.

One thing that makes Klopp unique is how he endears himself into the hearts of not only his players but his fans and rivals with his wide grin.

Klopp vs Guardiola – Head to Head

This is pretty straightforward. Klopp and Pep have faced each other 17 times over the years. Klopp has a slight Klopp vs Guardiola edge with 8 wins compared to Pep’s 7.

Their very first meeting came in the 2013/14 season in the German Super Cup match between Klopp’s Dortmund and Pep’s Bayern. Klopp came out tops in that one with a 4-2 victory. Their most recent meeting came in Man city’s triumph in the 2019 Community Shield.

This close head-to-head battle is one of the reasons their rivalry has become intriguing. Both managers usually have to be more conservative in their styles when facing each other. This shows the amount of respect they have for each other.

If you’re good with maths, this will interest you. Pep has a 72% career win ratio, 12% of his career losses have come from Klopp alone. The German is the only manager he has faced five times or more that has a winning record on him.

With just a little over ten years in management (including a one-year sabbatical), Pep’s trophy haul is staggering! His most recent win came in the 2019 Community Shield win against Liverpool.

That win took his trophy tally to 27! That’s an average of about 2.7 trophies every year. His haul of 14 trophies in Barcelona is a record for the club by a single manager.

When compared to the Spaniard, Klopp’s trophy haul of just seven seems meagre. But when you compare the calibre of teams the German has managed, it’s quite impressive.

He was able to guide Dortmund to back to back league wins against almighty Bayern. His most recent success came in the victory against Chelsea in the 2019 UEFA Super Cup.

Both managers are very different in style and calibre of teams they’ve managed. They are, however, respected by their peers and adored by fans all over the world.

They have turned several players they managed into world-class players. Klopp has Mané, an FPL favourite and Salah, Pep has De Bruyne and Sterling.

However, based on the arguments that have been made for both coaches, some may say that Pep Guardiola wins the Klopp vs Guardiola rivalry.

Many would argue that Klopp wins since he has managed clubs with tighter budgets compared to Pep.

Pep’s teams dominate whatever league he is in, imposing his style and authority. His trophy cabinet is already spilling over and would likely continue to increase.

Klopp is also impressive. His manic style of football is a joy to watch for the modern football fan. Who would you rather pick in the Klopp vs Guardiola saga? Let us know in the comments below.