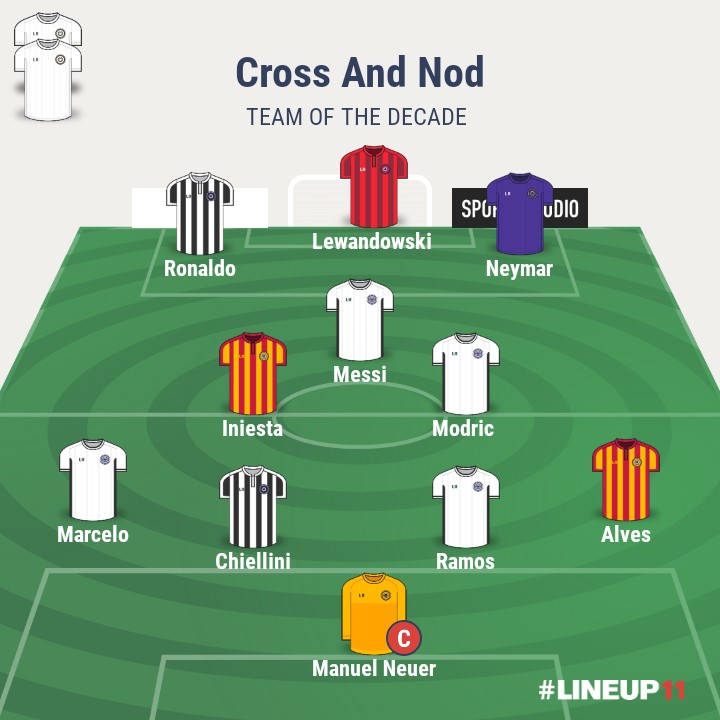 On the international stage, we enjoyed the first World Cup on African soil, Germany’s humbling of Brazil, Chile doing the impossible and Portugal’s first international trophy.

This begs the question. Are exploits in country colours enough to warrant a player a place in the team of the decade?

Club football was not without its magic.

Or have you forgotten how a certain Real Madrid defender rose to the occasion to deliver La Decima?

The last decade had it all.

We can only thank the god of soccer for blessing us with such wonder and splendour.

A minute of silence in gratitude, please.

Anyways, all of the action we have witnessed over the past ten years means that there are players who rose to the occasion consistently.

This means that we can use performances to decide who makes the team of the decade.

After spending hours watching footage to juggle our memories, our team of analysts, data scientists, supercomputers and football pundits have come up with this team of the decade.

Our analysts may be writers with an eye for the game. Our data analysis may have been done with a Casio scientific calculator. And our supercomputers may have been YouTube.

That one no concern you. It doesn’t mean we’re not right. Our football intelligence and analysis skills no be for here.

This is the only team of the decade that matters. Take it to the bank.

Cules and Madridistas, Gunners and Blues, Citizens and Red devils, here is your team of the decade.

Manuel Neuer’s heroics for Bayern Munich and Germany edges him over the likes of Keylor Navas, Gianluigi Buffon, and Iker Casillas.

He was more than a pivotal part of Germany’s world-cup winning squad of 2014.

Who can forget the best exhibition of the sweeper-keeper role that we have seen in our lives?

Neuer is the broom that APC claims to be. Make of that what you will 😁.

In addition to winning the World Cup, he also racked a Champions League trophy in 2013 and has been a pivotal part of 7 straight German Bundesliga trophies.

If Neuer is not your goalkeeper of the decade, I don’t think you are focused on the things that matter.

Everyone who knows a little about football knows how talented Marcelo is.

His flair, skill on the ball, attacking prowess, and sheer passion is why he is ahead of Jordi Alba and David Alaba in our team of the decade.

Over the past ten years, Marcelo formed a deadly partnership with Cristiano Ronaldo on the left-wing for Real Madrid – a team that went on to win a record-breaking three UEFA Champions League titles in a row (a.k.a back-to-back-to-back).

Some even say that the sight of Marcelo constantly pinging crosses onto CR7’s head used to move them to tears.

His Champions League trophy count stands at four during this decade – an impressive tally for any player.

His rock-solid partnership with Bonucci and Barzagli put fear in the heart of attackers all over Europe.

I mean, the man kept a clean sheet across two legs in the UCL quarter-finals of 2017.

The Juventus captain led his team to a record seven straight Serie A titles in the past decade.

Although he didn’t exactly sparkle with his national team, Chiellini has proved himself to be a defender whose exploits across the 2010s will resound across history.

Defenders do not come any tougher than Sergio Ramos.

The Real Madrid legend, who is the record holder for most games for both his club and national sides, is undoubtedly going to make any team of the decade list you’ll see out there.

He captained Real Madrid to their 11th, 12th, and 13th Champions League titles this decade.

Don’t forget his clutch header to level proceedings in the 93rd minute of the 2014 UCL final.

No other captain in history can boast of this feat.

Legends will remember that Sergio Ramos even played at right-back in the 2010 World Cup.

Clutch goals. Commanding performances. Red cards. Hairstyles and Panenkas, Ramos has got it all!

Dani Alves has the record number of most titles won amongst active players. ‘Nough said.

I have noticed that some misled people are comparing TAA and Alves already.

TAA is amazing, but he is still a long way from Alves’ legacy. The years between 2010 and 2019 were Alves’ most illustrious years.

With Barça, he won the famous sextuple racking up plaudits along the way.

His effective partnership with Messi rocked Spain and was only rivalled by Marcelo-CR7 linkup at Real Madrid.

After Barcelona, he moved on to Juventus and Paris Saint-Germain, showing himself an invaluable footballer with an uncanny ability to win trophies everywhere.

In the 2010s, Iniesta proved himself to be on a level of his own with his performances for Spain and Barça.

Despite leaving Barcelona in 2018, Iniesta’s genius is undebatable.

Playing behind Barcelona’s ever-threatening attack, Iniesta’s partnership with Xavi was the cog that moved the Catalans forward.

With Spain, he was the creative force of the national team.

In fact, he was the hammer that delivered the final blow that ended Dutch dreams in the 2010 World Cup final.

Many critics think that Iniesta should have won the Ballon d’Or in 2010, especially since he conquered the world and Europe that year.

Unfortunately, like many others, he could not break the dominance of Ronaldo and Messi.

Or maybe he just didn’t have enough PR to push his case for the Ballon d’Or.

Luka Modric still remains the only player to break the Ronaldo-Messi dominance of the planet.

This, along with his sheer ability on and off the ball, is why he is in our team of the decade.

In a decade dominated by Cristiano Ronaldo and Leo Messi, Luka Modric showed great talent and vigour to lead his country to the final of the 2018 World Cup and win the Balon d’Or in the same year.

Perhaps what makes this the more impressive is the fact that he was named ‘worst signing of the year’ by Spanish papers after his first season at Real Madrid.

You know who this is. There can’t be a team of the decade without Leo Messi in it.

Leo Messi is the player with the most Balon d’Or titles in history. He is on a level of his own.

In 2015, his former coach, Gerardo Martino famously said Messi can play every role in midfield, attack, even defence and thrive.

Such is the unfathomable level of his brilliance with the round leather at his feet.

He scored almost 400 goals in the 2010s. Many footballers cannot boast of this number across the entire span of their careers.

Arguably, football’s most excellent star, his insanely impressive numbers during the last decade puts him in our XI of the 2010s.

Are you even surprised?

In Portugal, Cristiano Ronaldo is a god figure. In Real Madrid, he is a legend and for good reason.

With a career tally of almost 800 goals, Cristiano Ronaldo racked up four Balon d’Or wins in this decade, taking his total score to five.

Is there a player more deserving of a place in this team of the decade?

Neymar Jr. is a player that is not always far away from the headlines.

Although he is not always in it for the best of reasons, Neymar’s talent is undebatable.

Forming a deadly trio (the MSN)  with Messi and Suarez, Neymar conquered Europe and was considered the heir to Ronaldo and Messi’s dominance.

Neymar shocked the world of football when he left his comfort zone in Barcelona to make his name in Paris.

Messi has reportedly told Barcelona to rẹ-purchase him as he considers him the heir to his throne.

Does praise get any higher? That’s why he’s in our team of the decade.

Bayern’s Lewandowski is one of Europe’s elite strikers.

Year on year, he has proved himself a formidable opponent for fellow strikers, Luis Suarez, Sergio Aguero, and Pierre-Emerick Aubameyang.

He has stayed Bayern’s top goalscorer since his transfer.

Although he hasn’t enjoyed much success with his national team, Robert Lewandowski’s eye for goal is not something to be joked about.

Last year alone, he was the highest goal scorer of the calendar year.

Also, his consistency and ability to stay fit all season long is why he is ahead of Aguero on this list.

Don’t forget he scored five goals in 9 minutes this decade too!

Team of the decade: Final take

CrossAndNod’s team of the decade features zero appearances from any Premier League player.

However, if Liverpool and City can keep up their run of form, especially on the continental stage, they just might dominate the team of the next decade.

Is there a player you think should have made this list? Do you disagree with any of our selections?

Let us know in the comments section below. Not on WhatsApp, plis dears!