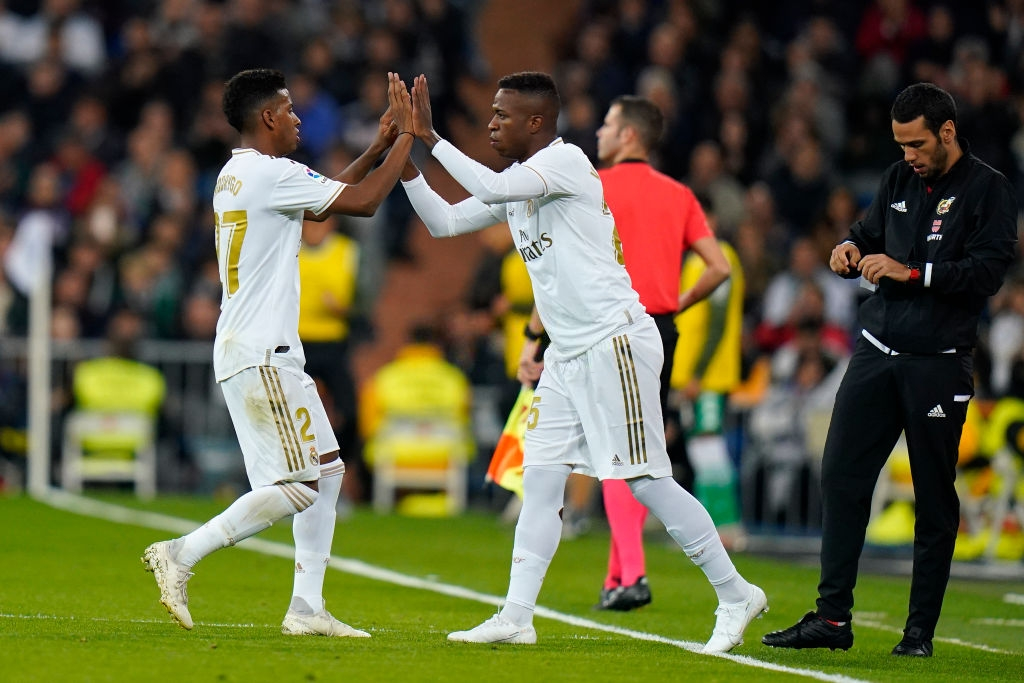 Brazilian wonderkids are the shiny new and exciting Teslas of football. Before they blow, they are first forged in the Ginga-Samba furnaces of the Brazil talent factory.

For football fans, however, Brazil’s famous talent factory produced the most important export from the country  — football players.

Everyone knows Brazil for their rich football history.

Many legends of the beautiful game have come from Brazil – Pele, Ronaldo de Lima, Roberto Carlos, Ronaldinho, Rivaldo, Kaka, to mention a few, are some of the famous Brazilian soccer players the South American nation has blessed the world with.

Some may say that the Ballon D’Or winners are the result of good PR.

However, there is no doubt that Brazil tops the list of countries with the most Ballon D’Or winners due to the stunning talent of players the country has produced over the years.

I could go on and on with a list of Brazilian wonderkids we have watched over the years, but we no go comot here today and time no dey.

That probably deserves an article of its own if it hasn’t been overdone already.

Unlike Apple, however, we’re always excited to see a precocious soccer player from Brazil take the world by storm.

So, what has made this soccer-crazed nation a hotbed for unearthing potential superstars?

Why are soccer players from Brazil highly coveted all around the world?

Well, Brazilian footballers just have something different about them, even at a young age.

These Brazilian wonderkids are typically so good that the elite clubs from Europe are willing to pay staggering fees to acquire their services.

Keep reading to find out more about the secret of the best young players from Brazil.

Experience for yourself how the Samba in the best Brazilian wonderkids is born.

How Brazilian Wonderkids are Made

At this point, it is probably a religion to them.

Ever since Pele burst onto the scene as a precocious 17-year-old starring in the 1958 World Cup, Brazil has been obsessed with the game.

“For every 10 kids in Brazil, 11 of them want to be a professional football player.”

Many, especially those from low-income families, see the sport as a way up in society.

Unlike their European counterparts, many of whom join football academies as early as age 7, most Brazilian kids don’t get the opportunity of an organised football education until their teenage years.

Therefore, they hone their abilities on the streets and beaches of Brazil (We love Brazilian beaches).

This makes their style of play ‘unorthodox’ as many have to play with kids twice their size.

This is why dribbling abilities and trickery are synonymous with Brazilian footballers.

Brazilian Legend Ronaldinho is an example of a player made on the streets of Brazil.

He played the beautiful game with so much joy. He always had a happy face regardless of the in-game situation.

Different countries have their football philosophies.

For example, in Germany, it is work ethic. In Spain, possession football and technical ability are the order of the day.

In Italy, it is tactical and defensive organisation.

What is Brazil’s philosophy of the beautiful game? What makes the average Brazilian footballer tick?

Well, according to Brazil’s ex-Sports Minister, Aldo Rebelo, it is happiness, improvisation, and freedom.

The raw material is the dream of millions of children to play professionally.

This is why so many Brazilians play the game with so much joy.

Their unconventional style has made Brazilian players attractive to European elites.

Some of the most successful teams in Europe recently have had Brazilian players as key members of the team’s success – Liverpool, Real Madrid, and Barcelona, etc.

Today, the Brazil talent factory has over 10,000 Brazilian players playing professionally around the world.

They love the game so much that they’re willing to play anywhere.

We all know how much they love their football in Brazil.

Therefore, it’s no surprise that they would have great academies spread around the country.

Yearly, there’s usually buzz around most Brazilian teams about certain teenagers that are performing well and ready for the big stage.

Brazil has become so obsessed with unearthing the next Pele, Neymar, Ronaldo, Roberto Carlos that they invest millions into their academies.

Santos, Sao Paulo, Gremio, Fluminese, Flamengo and so on, are just a few of the Brazilian teams that have produced wonderkids from their famed academies.

Some of these Brazilian footballers have gone on to be sold for huge sums to wealthier European teams.

These academies try to train their players to be able to fit into any team in the world.

Except for some barren period in the early 2010s, the Brazil talent factory has continued to produce superstars.

Clubs like Fluminese have even gone a step further by owning a ‘finishing school’ in Slovakia.

This unique experiment is supposed to prepare youngsters for European football if they’re eventually sold.

These days, it is not unusual to see up to 5 Brazilian wonderkids at a time leaving Brazil for some of Europe’s elite clubs for fees of up to £30 million.

Real Madrid, in particular, have become regular customers of the Brazil talent factory.

As has been the case over the last three seasons, they recently signed 18-year-old Reinier Jesus who they unveiled recently.

Brazilian players in Europe are nothing new.

Most of the great players from Brazil had their best years with elite clubs in Europe.

However, there’s so much more attention given to it now due to the high prices these young players are sold for.

Their popularity might have waned now especially in Europe, but the academy slash club remains quite popular in Brazil.

They do not have a senior team.

Their sole aim is to develop young players into superstars that they would eventually export to the world’s biggest teams.

In 2008, they entered an agreement with Manchester United, but somehow no notable player ever materialised from that agreement.

Some notable former players from the academy include Henrique and Keirrison, both of whom were bought by Barcelona.

In their almost 15-year history, they haven’t hit any jackpot in terms of players developed.

However, it is still interesting to know that, in Brazil, there exists a club that isn’t interested in competing for trophies.

This sheer undying belief in Brazilian wonderkids by the football system is a huge plus.

It’s not the fall; it’s how you rise after the fall that counts.

Brazilian football reached an all-time low after the mauling the national team received at the hands of Germany in the 2014 World Cup semi-final.

This unsurprisingly coincided with a period that saw a serious lack of star quality in the team.

Neymar, Thiago Silva, and Dani Alves were the only players who could be identified as ‘world-class’ in that squad.

The others were, no disrespect, just decent players who could get the job done.

The lack of star quality was even more evident when talisman, Neymar Jr. was ruled out injured for the semi, and none of his teammates could step up against the Germans.

Even Brazil legend, Jairzinho admitted the lack of quality in the team at the time.

The heavy defeat sent shock waves throughout the nation, and in fact, there were some protests against the team.

That period was a dark one for stakeholders of the football industry in Brazil.

Between 2010 and 2014, asides Neymar and probably Douglas Costa or Coutinho, Brazil struggled to produce world-class talent, the reason for which is not clear.

While we aren’t sure what the Brazilian FA did to correct this lack of quality in the team, what we do know is that they set out to rebuild the national team from 2015.

This ‘rebirth’ of the Seleção saw the emergence of a new generation of Brazilian wonderkids.

Gabriel Jesus, Arthur Melo, Everton Soares, David Neres, Eder Militao, Richarlison, Lucas Paqueta are some of the talents that have once again emerged from the Brazil talent factory after the 2014 debacle.

They went on to help Brazil clinch the 2019 Copa America.

Some of these players have also become important players for their teams in Europe.

After all that writing and reading about wonderkids and the best players in Brazil, it’s only right that we make a list.

These are some of the best talents from Brazil ready to take the world by storm in 2020 and beyond.

Some of these players are:

You will do well to keep your eyes peeled for these young men in the near future. They will become household names very soon!

Brazil might produce so many talented players yearly, but the domestic league has continued to regress.

Part of the reason for the decline is because European teams now show early interests to buy these Brazilian football players at the first sign of potential.

These teams want to bring in youngsters to Europe early so they can adapt to the pace and physicality of most leagues on the continent.

This is especially true for Real Madrid as they would forever regret missing out on a certain  Neymar Jr.

In recent times they’ve locked down players at an early age. Players such as Vinicius Jr., Rodrygo and more recently Reinier.

Brazil and South America in general also produce the kind of players many of Europe’s best academies haven’t been able to.

Players with pace, dribbling ability, flair and improvisation honed on the hard streets of South America.

Some of Europe’s most successful teams in recent years have had Brazilian wonderkids at their core.

Barcelona with Dani Alves and Neymar.

Liverpool with Firmino, Allison, and Fabinho; Real Madrid with Casemiro and Marcelo.

It seems like there will be no end to this gift of talented players from Brazil.

Jurgen Klopp also recently admitted that Brazil is amongst the top football training centres in the world.

Barring any post-apocalyptic virus/disaster, as long as humans continue to reproduce in Brazil, we will continue to get exceptional talent from this country.

Do you think other countries can boast the same consistency of talent production like Brazil? Or maybe you think there’s something in the water famous Brazilian footballers drink.

Let us know in the comments below!