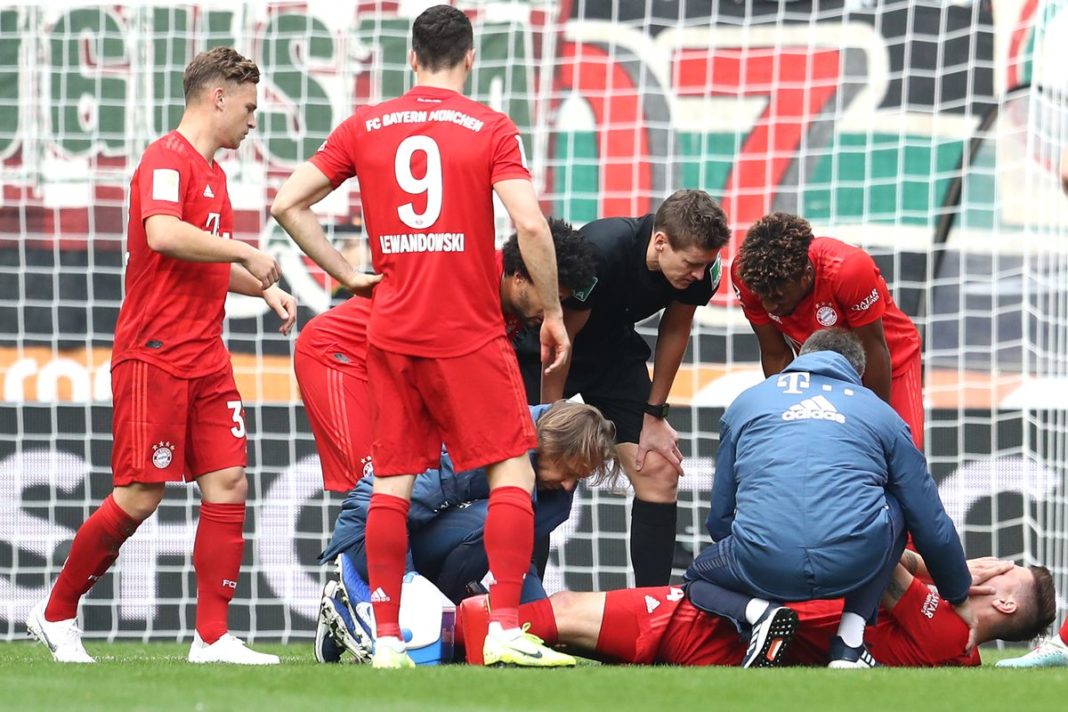 Bayern Munich news is abuzz with the fact that the club recently sacked their coach. However, if you are like us, you are probably wondering when the monopoly they enjoy in the Bundesliga will end.

Some people just want to watch the world burn. It is us. We are people.

In this article, we will explore the insane monopoly that Bayern has on the German league and why this year it will end.

Bayern Munich: Their Grip On Bundesliga

The year was 2012 — the setting: matchday 31 of the 2011/12 Bundesliga season, the Borussia Derby. Borussia Dortmund welcomed Borussia Monchengladbach in a vital title-deciding contest.

Bayern Munich, their closest rivals on the table had reduced the gap at the top with their early kick-off away at Werder Bremen.

Naldo had gone from hero to zero in the game. He scored to give the Bavarians a scare before turning the ball into his own net with 15 minutes to go.

Frank Ribery scored a late winner to ensure Bayern Munich news outlets passed the pressure on to Borussia Dortmund. Anything but a win would have led to the postponement of their confirmation as German champions.

A loss would have blown the title race wide open given that there were three games to go.

With the Yellow Wall behind them, the man from the Black Forest, Jurgen Klopp leading them, the hosts – die Schwarzgelben (the German word for “Black & Yellow”) – stood their ground and won their challenge.

Trust Klopp, the energy in the stadium would have been massive. You can ask Barça fans all about beating a Klopp team at home.

All of this happened on the 21st day of April 2012, the year they said the world would end. Lol. They don’t know that if it’s only because of football, the world will exist forever. But that’s by the way.

That was the last time a team that is not Bayern Munich won the Bundesliga. We know. 7 whole years that the season has ended with Bayern Munich in the news as champions.

Since 2012/2013 season, asides the fact that the Bavarian giants have gone on to win all the League trophies, they have also broken all the records set by Borussia Dortmund during their 2011/2012 campaign win.

Over the years, Bayern Munich news has consisted of records like ‘most points collected,’ ‘away wins records,’ ‘goals scored,’ and the coveted unbeaten streak.

Over the years, other rivals have challenged and even almost won the league, but like Shatta Bandle, they have all fallen short.

Since 2012, there have been two World Cup tourneys, a back-back-back UCL feat, a Leicester EPL triumph and a certain Swede has played for Manchester United. Bayern have lifted the Bundesliga bowl through all of this.

Experts say that if the Thanos snap had vaporised half of Bayern’s team, they would have still won the Bundesliga.

Well, that is all about to change.

Wondering how Bayern Munich is doing? This current season has shown us a “weak” Bayern. Granted, Lewandoski is in the form of his life.

The Pole has scored 16 goals in 11 league games this season and is on course to break Gerd Müller’s 47-year record of 40 league goals in a single campaign. Imagine how much ruckus that would make in the news if the Bayern Munich man can manage it.

However, Bayern are weak. They are third in the league, four points adrift of Borussia Monchengladbach. They are also drinking goals like never before.

For any rival, this is a season of “now or nothing” because if they don’t seize their chance now, it may take another seven years.

Why Have Bayern Been “Untouchable”

Before we go into why the defending champions could miss out this season, let us talk about why they have been untouchable.

There are two major contributing playmakers – finance and good management. You can call them the Xavi and Iniesta behind the Messi that is Bayern.

This is self-explanatory. The average football follower understands how big a difference financial strength can be. There is a list of the most expensive XI players that attests to this.

With money, you can keep your star players with lucrative packages. You can also buy quality stars, who are sometimes attracted because of how much they will earn.

For many players, the possibility of playing with the best in the league is enough reason to sign on the dotted line.

With Bayern’s money, they can buy the best players in the league. They can get as many quality players as they want as long as that money is there. Every year, Bayern Munich news is saturated with the fact that they have poached a star player from their rivals.

Money stops nonsense, yes, we know. But it can also transform a bang average club into a title-winning side. Laughs in 04/05 Chelsea.

Money can get you stars, but money won’t play for you.

There is a certain so-called biggest team in the EPL. We all know of their financial strength and market reach. In fact, they have used it over the past few years, but it hasn’t brought the results.

After missing out on the Bundesliga in the 2010/11 season, Bayern Munich experienced a change in personnel. Jupp Heynckes replaced Louis Van Gaal.

The former couldn’t make his team play to the weaknesses of Dortmund’s young and industrious team. The latter didn’t fare better as he also lost all games against them except the games in his last season where he won the treble.

With Bayern Munich in the news for winning the treble, you would think all was good. The club’s hierarchy was still not satisfied as they didn’t play convincing football, especially in the league.

On 16th January 2013, prior to the winning of the treble, Bayern announced that former Barcelona gaffer Pep Guardiola would replace Heynckes at the end of the season.

Pep Guardiola came and restored them back to their “normal” level of domestic dominance, but with his failings at Europe, he has had to make way too.

The Bayern board is hard to please. But this distaste for mediocrity and complacency is part of why they are untouchable in Germany.

Why Bayern Munich Could Miss Out This Season

So far this season, news and results from Bayern Munich have shown a soft centre that we haven’t seen in about 8-9 years.

From the manager’s flat style of play to unconvincing results, to injury to key players, and a dressing room devoid of motivation. All of these point to the fact that die Meisterschale is up for grabs for a worthy contender.

The season opener at the Allianz Arena against Hertha BSC showed glimpses of what was to come. Lewandowski came to the rescue to win a late point for Bayern.

Two wins followed their opener, but Bayern Munich were halted by RB Leipzig who are currently 2nd and clear title challengers.

They narrowly saw out a win against SC Paderborn. An efficient and fully operational FC Bayern team would have wrecked Snapchat Paderborn.

Bayern had most of the possession, but their final passes were lacking. Their sensational striker Lewandowski struck to level but his opposite number, the American had other plans. He struck late to win the full points for the visitors.

Sebastian Rudy ran the show for Hoffenheim against his former club. Unlike the previous Bayern teams, they are now laughing on the table and depend on the outcome of other matches to know their fate.

They conceded another late goal against Ausburg in the following match day to add to their woes and put their manager under fire.

Niko Kovac has been culpable for a few of Bayern’s bad performances. One too many, according to the Bayern board.

Trust Bayern Munich not to manage complacency. To put it in gentleman terms, they parted ways with coach Niko Kovac.

A fan favourite, Thomas Müller has been benched for most of the games this season. He is sometimes played out of position when introduced, or he is introduced late into the game with little time to make an impact.

Injuries to key players and a lack of cohesion

The lack of cohesion in the team has been masked by the scintillating form of Robert Lewandowski and Serge Gnabry. However, in the games where they are not in full flow, the insipidness in Bayern’s play has been noticeable.

Long-term injuries to first-choice defender Niklas Sule and versatile defender Lucas Hernandez has put the team in a bind.

The onus is now on other defenders – who play in different positions or who have not been as convincing in training to warrant a starting berth – to save their season.  Bayern Munich news headlines show that marauding left-back David Alaba has played at centre back this season.

A lacklustre cup win against 2. Bundesliga outfit, VfL Bochum shows how low Bayern have plunged. It was a scrappy win with zero excitement and zest for supporters.

Finally, Bayern has lost 5-1 this season. Not to Dortmund or RB Leipzig, or even league leaders Monchengladbach but to 9th place Frankfurt.

The last time Bayern lost with that margin was a decade ago against eventual champions, VfL Wolfsburg.

This defeat was the last straw that led to the parting of ways with manager Niko Kovac.

Interim coach Hansi Flick will continue after Bayern’s impressive 4-0 win against Dortmund in Der Klassiker. He would try to instil his system and gameplay into the players. This could take a while or be immediate. It all depends on the adaptability of the players and how easy it is to learn from the manager.

But if this stop-go style of play and results persist, then the long reign of the Bavarian giants might just come to an end because CONSISTENCY WINS THE LEAGUE.

What do you think? Have your say below. Will the new manager be instantly successful? Which manager will you recommend they should sign for the long haul? Do you think Bayern can still win the league?

Please do not forget to share. We put a lot of effort into this, let your friends enjoy it too.

In the spirit of scaling coaches, here is our list of coaches that may be sacked before the season ends.